My research mainly deals with the development of solid-state lasers and optical-parametric amplifiers.

The second focus of my work consists in the development of photoinjector drive lasers. When focusing these pulses onto a photocathode, electron bunches of high density are generated. After being accelerated in a linac, these bunches are well suited for driving Free Electron Lasers (FELs). The properties of these electron bunches can be optimized by appropriately tuning the shape of the picosecond laser pulses. To accomplish this, we have developed the first Yb:YAG laser in the world, that can generate trains (bursts) of ultraviolet laser pulses with variable shape.
Several of these lasers are used at electron accelerators and FELs, such as:

Lasers for driving the photo injectors:

Burst-mode lasers for driving the photo injectors of superconducting linacs that are operated with bursts of electron bunches: 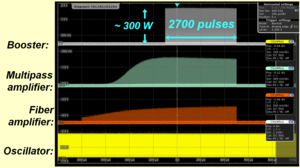 Pulse trains messured in the XFEL photokathode laser after the oscillator, the fiber amplifiier , the multipass ampliifer and the booster

1994-present: Scientist and Project Manager of several projects at the MBI as well as projects conducted in cooperation with DESY, HZB Berlin and HZDR Dresden (Rossendorf) to develop special solid-state lasers and femtosecond OPCPA systems

1993-1994: Scientist and project manager at the Max-Born-Institute (MBI) Berlin. Field of work:

1985-1991: Scientist at the Central Institute for Optics and Spectroscopy Berlin.